ReFrame offers a unique blend of intellectual rigour and practical theology by engaging a wide variety of teachers and practitioners. Each episode features world-class lectures by Regent College professors, real-world examples from practitioners, and insight from prominent Evangelical thought leaders.

Director, American Association for the Advancement of Science's Dialogue on Science, Ethics, and Religion 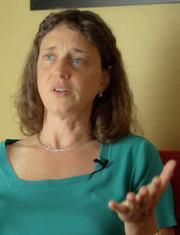 Jennifer Wiseman grew up on a farm in the Ozark mountains of Arkansas, where she learned to appreciate the night sky and the natural world. She studied physics for her bachelor’s degree at MIT, discovering comet Wiseman-Skiff in 1987. She received a PhD in astronomy from Harvard University, followed by research in star formation as a Jansky Fellow at the National Radio Astronomy Observatory and as a Hubble Fellow at the Johns Hopkins University. She later served as the Program Scientist for the Hubble Space Telescope at NASA Headquarters, and then for several years headed the Laboratory for Exoplanets and Stellar Astrophysics at NASA's Goddard Space Flight Center, where she is now the Senior Project Scientist for the Hubble Space Telescope.