The Image & Temple of God

An Interview with Rikk Watts 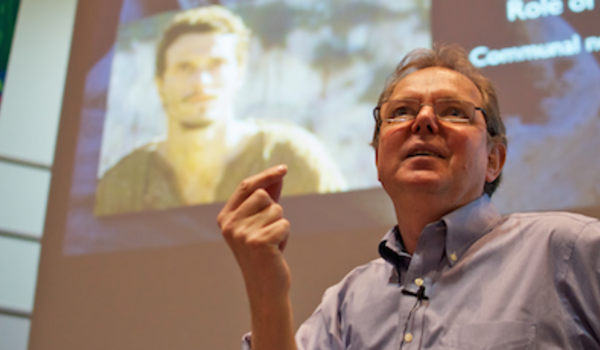 In this interview, Rikk talks about two implications of the fact that God cares about all of life and reflects on how that impacts his life on a day-to-day basis.

Trained as an aeronautical engineer, Rikk Watts worked for IBM while undertaking a degree in philosophy, art history, and sociology. He is an expert on the relationship of the Old and New Testaments and returns to Regent College this Summer to teach two courses: ‘The Use of the Old Testament in the New Testament’ and 'John's Gospel: The Life of God to the World'.

ReFrame: ReFrame invites people to “Enter into the big story of Scripture and explore how the Gospel reframes all of life.” For you personally, what are some of the implications of the fact that God cares about all of life?

Rikk Watts: Oh, my goodness, well the obvious thing is that I should care about all of life. But I think it’s about the seamlessness of human existence and God’s creation.

I’m teaching this course on Jesus and the mighty deeds of YHWH. In class we have been talking about how people can read those stories in the Gospels and think that Jesus heals this person and that person and that they’re just scattered events. But I think there is a coherence to them, and that coherence is the restoration of the image of God. There are two things going on: one is the restoration of individuals, and the other is that, in the gospels, these healings function within the larger story, so they speak to the broader narrative of what it means to be human. There’s a lot of detailed stuff about individuals, but there’s a larger narrative in which they’re involved, and I think that way of thinking is critical.

So, regarding this idea of God’s love for everything, the big question for a human is: what does it mean to be human, why am I here, how do I make sense of it, how do I correlate the big picture and the details? The freedom and the constraints; I think that’s what scripture offers us. And it does it brilliantly without falling into the error of starting with our own perception of what we think is going on.

If I take this to a more personal level, I think the first thing I’d say is that it is a good question to ask about the implications of God caring about all of life. But, when I say “all of life” – that is kind of undifferentiated: what is it, right? And, everyone has to have some way of distinguishing stuff that’s going on in the world. That’s why most ancient cultures have purity regulations. They’re not just being fastidious about dirt—it’s about finding the centers, clarifying the controlling things that map everything else and recognizing the centers of gravity.

So—and people who have seen ReFrame will understand this—it’s one thing to say God cares about all of life, which is true, but what does that mean if you don’t have a grid that orients it? I think the great Biblical contribution is that first of all, creation is God’s temple. And second, people are made in his image. There are only two, so it’s not complex; you don’t have to remember 10, and they integrate with each other. And what those controlling metaphors do is give you a basis on which to deal with all of the diversity, and they give you a framework to give everything its proper place. And, of course, that all presumes that there is a God, who stands behind that who is the one you encounter in YHWH and ultimately in Jesus.

What does that mean practically for me? Well, I want to treat everyone I meet with utmost integrity when I meet them? I’m never to objectify them. So, when I’m talking to the person who serves me at the restaurant or the gas station, the first thing is: this person is made in God’s image. I need to show them great dignity and respect. I need to treat them in ways that bring them life. So that means every single encounter with somebody: it's not trivial. I’m learning how to attend to people.

For example, I've been away from Regent for six months, and today I went to this little breakfast place down the road where I would regularly have breakfast with my teaching assistants. And the woman who runs it was there, so I just kind of made my way through the crowd, and went up and said “excuse me” and she turned around, and her face just lit up and she was so happy to see me. And we talked and had this kind of remembrance and friendship because we’d done that every time we went to the place. She always knew us to be the people who would pick our dishes up and take them over to her. And she would say: “No, no, that’s our job!” and we would kind of laugh about it. But she knew us for that, and there was just this deep relational thing. So that’s the personal element.

As for the second element, I was trying to tell the students in class today that I’m intrigued why it is that so many Christians feel that God is absent from the world and they have to do something about it. I just don’t understand that. I don’t see Paul ever thinking that; I don’t see it in John. They know they’re in a broken world, but none of them seem to feel like “I have no sense of God around here.”

Jesus died so the spirit would dwell in you. You don’t have to go anywhere; he’s going to come and do this and, if you know he’s in you, that changes the way you approach the world.

Now, photography taught me to look small. So just look at a single leaf in the sun under a blue sky. Can you see all of the beauty in that? It’s not an accident; it’s a gift! It’s part of God’s temple that he made for us to live in. And every other leaf is the same thing, and if you discipline yourself really to see that, then you can see things like good coffee as God’s gift to us. And I know there’s brokenness in the world, I bear in my body the marks of the brokenness in my damaged left eye. But that doesn’t take away from the fact that there’s so much wonder and joy still in this world. Because it’s his temple, and it’s all gift.

So those two things—the way I treat people, and just the sense of God’s incredible presence. I don’t feel like he’s ever absent. We’ve recently moved to Australia, there have been some tough times there for sure, thinking “what in the heck have we done!” We’re trying to sort out this significant transition, but there’s never been a sense of God not being present in that. And you know me, that’s why I always stress the fact that the New Testament focuses so much on the Spirit. The world doesn't need to be enchanted, because, as God's temple, it is already sacred. He’s told you that. There’s no need ever to feel that this is not a Holy and sacred place.

The result is that I live in a wonderfully Spirit-enlivened world. The Spirit indwells the image, and the image indwells the temple, and that reality has changed the way I see everything.

Are you interested in using ReFrame to run with your church or small group? Learn More